WSJ has announced the name of Samsung’s foldable phone

WSJ has announced the name of Samsung’s foldable phone

Samsung began to excide everyone with its foldable smartphone in the SDC 2018.  The company did not specify when the device would launch with the final version and what its name would be. The WSJ has an allegation of the name of the device. Earlier this month, Samsung performed the developer conference in 2018. In this conference, Galaxy smartphones with the new interface one Uı, the Galaxy S10 ‘ shape ‘ expected to give the “figure” of the Display design and the company’s first foldable smartphone also revealed the face of the day. The phone, which was not surprisingly foldable, was the main attraction of the conference. 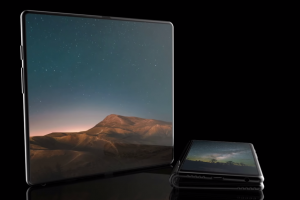 Samsung has staged a prototype of a foldable smartphone and showed it to the participants. It did not share much information about the technical details except the screen size and device usage.  The company didn’t announce what name the foldable smartphone would launch and when its launch would occur.

The Wall Street Journal, the United States-based international finance and News newspaper, has acquired information from its sources close to Samsung. It is announce what name the foldable smartphone would launch and when its launch would occur.