An SSD which is combining high performance and large storage capacity, Samsung 970 EVO NV Me 1 TB is in our hands! We’ve reviewed for you.

NVMe M.2 SSD’s are much better than not only classical Hard Discs but also they are even better than normal SSD’s. In this way, it would be a great choice to get this type of SSD for performance issues. Of course they are really expensive and they become more expensive depends on storage capacity. In this way it is important to say that this device is not appropriate for all pockets.

You can get a brand new Samsung 970 EVO NV Me M.2 SSD with 1TB storage for $300 on the market. Of course it’s little bit expensive but you will get the results of it immediately, with performance and storage capacity. In this point it’s important to say that it has much more advantages compared to previous 960 EVO with 1 TB model. Because the price of these two devices nearly same but 960 EVO NV Me is limited to reading point at 3200 MB/S on the other hand it comes with 1900 MB/s on writing.

Coming with huge 1 TB storage, 970 EVO NV Me M.2 SSD can reach up to 3400 MB/s at reading and it can reach up to 2500 MB/s at writing. Of course there are lots of factors which affects the performance apart from disk storage. For example, the 250 GB version of 970 EVO NV Me M.2 SSD is 100 MB/s faster than 1 TB version. However the difference between them are not too much to become an important factor, since we are talking about faster speeds.

Developed within M.2 form factor, 970 EVO will find easily a place on new gen motherboards with increasing M.2 slot numbers.  Users who have got a sample of these kind of motherboards, should prefer motherboards which holds M.2 slots under the heat sink in order to increase the performance. If you don’t have these kind of heat sink you can always use an external M.2 Heatsink devices.

Using V-Nand storage type, 970 EVO NV Me M.2 SSD really gets attention with its IOPS results. Of course it is really important to get better data transfer performance depends on higher IOPS scores. In random reading scenario, 970 EVO NV Me M.2 SSD has reached 500 thousand IOPS score, and it has reached 450 thousand IOPS score. These results are very important to users who seeks out for great performances. 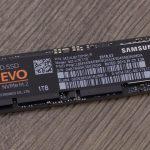