Vine was closed in the year 2016. But, Vine, the popularity of the platform still continues on YouTube and similar video sharing sites. The Byte is called Vine 2.0. It will be released in the spring of 2019.

After Vine’s closure, it was still a popular and desirable platform. Vine has mobilized the application producers. And Byte appeared.  And as of today, the Byte opens its doors to the content producers.

Vine was the first address of many content producers that currently produce content on YouTube.  It will save more money for Logan Paul, Cody Ko, Drew Gooden, Gabbie Hanna and many other content producers. It is expected to return to the short video creation platform. 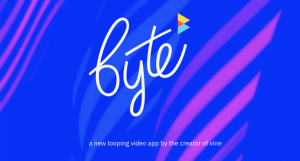 Platforms like TikTok tried to fill the gap from Vine. But none of them were described as heir to Vine. The size of the potential mass that the Byte can reach will become a big market for advertisers.