Honor is the bottom brand of Huawei. Honor is preparing to announce a new smartphone. 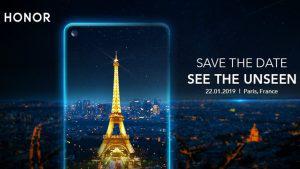 Huawei  involved in this race with the Nova 4 smartphone. Huawei’s sub-brand Honor is not back.

The company will announce its first smartphone with an infinity-O display with an event on January 22 in Paris. The smart phone that is expected to be announced will be honor View 20, the next generation of Honor view 10.

Honor View 20 expected to have advanced rear cameras; It has equipped with a 92% screen-body ratio FHD + ınfinity-O screen. It will receive its power from the Kirin 980 processor and 6GB RAM. There are also rumors that the fingerprint reader embedded in the screen used.