Samsung has announced that it would update some of its released smart phones with Android Marshmallow in 2016 to Android Oreo. In this context one of the smart phones having Oreo update became Galaxy J7 Prime.

The updating started to be delivered for the first time in India last week, has met many devices from different countries.

Increasing Galaxy J7 Prime’s operating system to Android 8.1.0 the updating is hosting to the security patch of September. Besides, together with 1 GB updating the device’s user interface will be increased to Samsung Experience 9.5. 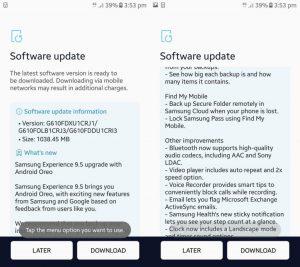 In addition to these, the updating hosting Picture-in-Picture feature come into use with Android 8.0 and admitting of watching a video in a small screen while working on an app is meeting users with new emojis, developed battery detail and notification delaying features.